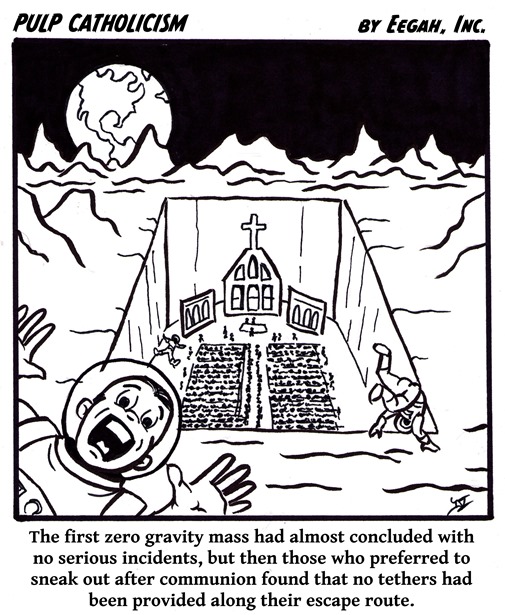 I laughed myself silly! However - there IS gravity on the Moon. (There's gravity everywhere, but its force attracting you to the ground depends on the mass of the planet you are near, how far away you are, and, if you are in a spacecraft, whether you are under power.) On the Moon it's about 1/6 that of Earth. Means they could make their escape by bounding directly from their pew and would still return to the ground. (You can jump about 22 feet up. See more here: http://clarionfoundation.wordpress.com/2010/05/27/spec-tech-jumping-on-the-moon/
)
It's a bad idea though - risks a tear in their space suit if they don't land on their feet.
None of this alters the fact that your cartoon is still hilarious!

I knew I wouldn't be able to slip that past you NASA types :) I had thought of the moon's gravity, but couldn't resist using the crater setting from 2001 A Space Odyssey. Besides, this way they just regret their decision, not suffer a horrible death because of it.