For Aleteia this week, I reviewed The Purge, a potentially nice little siege movie that quickly became weighted down by an over-bloated sense of self-importance. Still, the idea that the government would legalize all crime for a 12 hour period once a year was an interesting, if ultimately unworkable, one. Now if you’ve seen the ads for The Purge, you probably couldn’t help but notice this imagery: 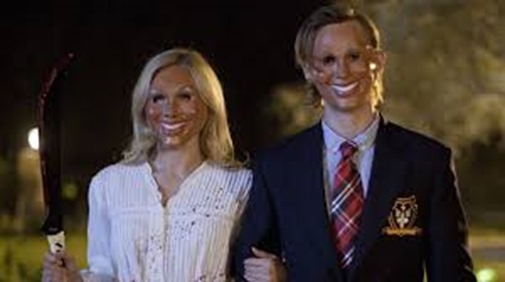 Yep, it seems like many of those who take part in The Purge have chosen to adopt the age old custom of donning a mask while stalking their victims. As soon as the masquerading murderers made their appearance, I couldn’t help but give a quick thought to some of the more memorable masked killers who preceded them. Now everybody knows the biggies, guys like Jason Voorhies, Michael Myers, and Ghostface. But dig a little deeper and you’ll find plenty of fearsome facades to give you the creeps. 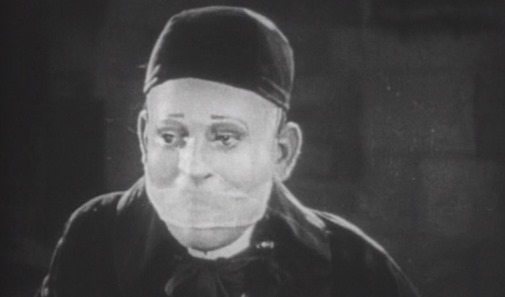 Thanks to the popularity of Andrew Lloyd Webber’s musical and it’s instantly recognizable visuals, most people forget about the granddaddy of all mask wearing movie maniacs, Lon Chaney’s Phantom of the Opera. Yes, what was underneath was worse than the disguise itself, but the mask is still a weird bit of imagery and an obvious ancestor of the disguises worn in movies like The Strangers and The Purge. 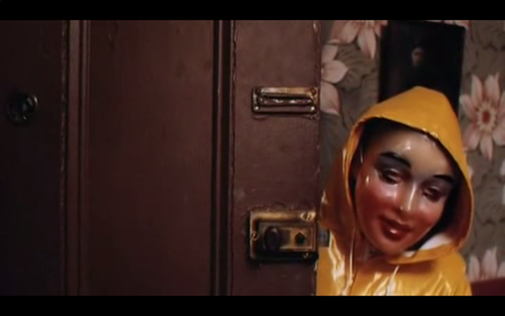 Another branch in The Purge’s family tree would have to be the bizarre little girl mask worn by the killer from Alice Sweet Alice, the feature film debut of Brooke Shields and the only movie I can think of (thankfully) to feature the murder of a priest during communion. Obviously not the most Catholic friendly movie around. 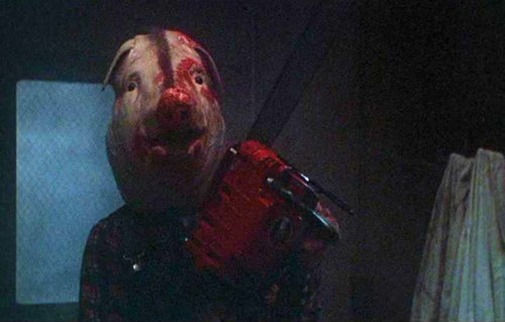 If you thought Saw invented the disturbing pig head mask, think again. Everybody’s favorite cannibalistic siblings, Farmer Vincent and his sister Ida, were hamming it up decades before JIgsaw carved his way into cinemas. 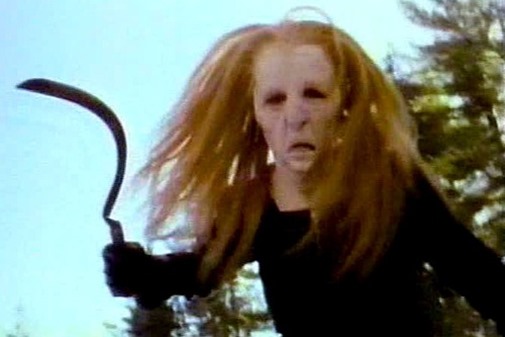 I’m pretty sure there’s an entire generation of HBO viewers out there who were given the heebie jeebies by The Hag after catching Curtains on one of its many late night airings. Simple, but effective. 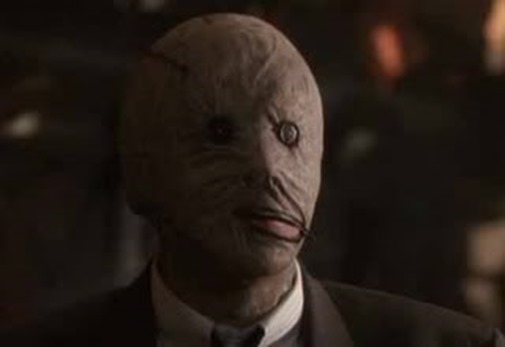 While all the supposed monsters in Nightbreed were hanging out underneath the cemetery, the real one was creeping around the suburbs in this freakish little get-up. I have to say, this mask completely ruined the animated feature “9” for me, because I kept expecting at any moment for one of the little ragdoll people to whip out a blade and gut someone. 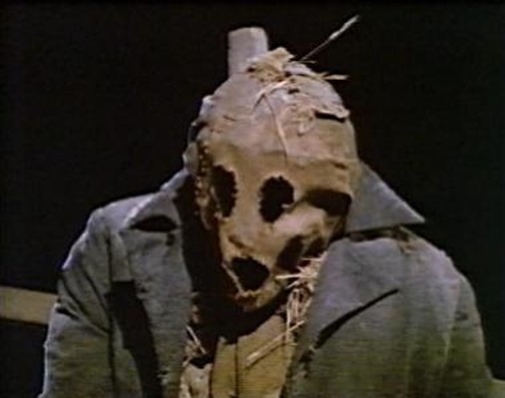 DARK NIGHT OF THE SCARECROW

Probably one of the most fondly remembered made-for-television horror movies ever made. The man behind the scarecrow mask was more avenging angel than psycho killer, but that didn’t make his appearnce any less eerie. 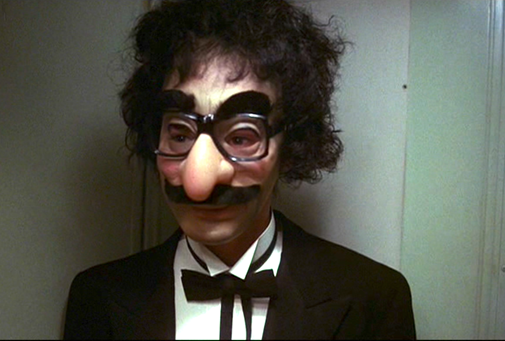 A Groucho masked serial killer? You bet your life! Maybe not the scariest disguise on the list, but certainly memorable. Just ask Jamie Lee Curtis, who had to try and hide from this guy while stuck on a moving train. The secret word for such situations? HELP! 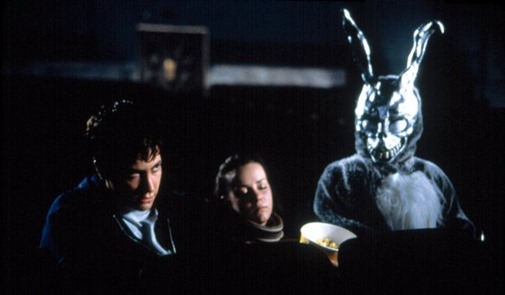 Okay, so Frank The Bunny wasn’t actually a killer himself, but he did his best to convince Donnie to become one, so that has to count for something. Plus, that mask is just creepy.

I could keep going, but that should be plenty to give faces to your bad dreams for awhile. Maybe we’ll do a sequel to this post when the inevitable Purge 2 comes out.

Now some folks who watched The Purge have questioned why its participants would bother to wear masks in the first place since the law as outlined in the movie plainly states that no crime committed during the 12 hours of the national cleansing will be prosecuted. Why wear a disguise to hide one’s identity when it doesn’t matter if someone knows who you are? Part of it, of course, is the creep factor. Killers wear masks in horror movies to scare people. But trying to view The Purge through the lens of the real world, there could be another possible reason for adopting a disguise while out killing your fellow man, legally or not.

According to Elena Bezzubova, M.D., Ph.D. in an article for Psychology Today, masks “appear to be parts of the broad depersonalization spectrum - a continuum of changed identities. Depersonalization presents elements of ‘a dialogue with what feels like my mask.’ The self looks at the self, as if an outside other. ‘I feel as if all I do is not my real actions but just a masquerade.’ ‘I know that my face looks as it looks all the time. But it feels to me like a mask.’ Masquerade comes as a safe opportunity to play with different sides of one's own identity.”

If we take what Dr. Bezzubova postulates as the truth, then that may point to a reason The Purgers, as well as some other masked killers in the movies, might choose to wear a disguise even when they don’t have to. It depersonalizes the experience. It allows them to say to themselves, “That other creature committed those horrible acts, not me. That monster was just someone I put on for an evening.” And maybe that’s what makes masked killers a bit more frightening in movies, because the victims (and we viewers as well) can sense the disconnect from humanity the killers experience once they don their disguise. Masks offer less opportunity for empathy or mercy.

That’s why, even in circumstances completely opposite to such things as murder, like say moments of charity, the Church suggests we follow the example of Jesus and keep as little as possible between ourselves and the recipients of our actions. In a Christmas radio message entitled The Depersonalization of Man, Pope Pius XII had this to say of our Lord. “He was happy in bending compassionately over the wounds of humanity and the tattered rags of poverty. He was not satisfied with proclaiming the law of justice and charity, nor with condemning with withering anathemas the hardhearted, the inhuman, the selfish; nor with the warning that the final sentence of the Last Day will have as the norm of its judgment the exercise of charity as the proof of the love of God. But He spent Himself personally in order to help, to heal, to feed. Certainly he did not ask whether, and to what extent, the misfortune before Him happened because the political and economic order of His time was defective or lacking. He was not indifferent to that. On the contrary, He is the Lord of the world and its order. But just as His action as Savior was personal, so He wished to meet life’s other misfortunes with a love that was personal.”

This isn’t to say one should never provide charity through third party organizations. That would be silly and impractical in today’s world. But when the opportunity arrives to do something personally, we should take advantage of it before passing it on to someone else. Even a good thing like charity can become an impersonal mask if we’re not careful.

I don't even know where to start with this one. I mean, I know I should start with the praise about your observation about trying to mask our sins and create distance vs. Christ's route, but I feel like you're getting tired of all the adulation heaped upon you in these comboxes.

Instead, I'm just going to say that Donnie Darko was a messed up movie.

I can't even write a lucid comment right now, I'm so creeped out by the whole mask montage.

Actually, don't worry about my getting a swelled head. I think I made some long forgotten deal with God decades ago that requires I do something humiliating at least once a week to keep me honest.

Good one! the movie mask that first sprang to my mind was the babydoll mask of the state torturer in "Brazil" ("You're frightened? How do you think I feel?"). Closely followed by The masked torturers in Wolfe's The Book of the New Sun and Abercrombie's First Law Trilogy. I'd think the masked torturer/headsman tradition is evidence #1 for Bezzubova's claim--did she go there?

The article didn't go there, but there's a book, so maybe it's touched on in that.

The Brazil mask is a great one. I'll be sure to include it if I revisit this theme down the road.

Jeez, there's clearly a more practical reason for Purgers to wear masks. Somebody may survive, or report to friends & family who attacked them. And then there's next year to extend the vendetta....

Well, sure, but then where's my article to write :)