With all the real (and often deadly) persecution of Christians going on in places like Asia and the Middle east right now, it seems almost trivial to complain about a bynch of stupid movies mocking my religion. But, you know, there sure seems to be a lot of them coming out soon.

The easiest to stomach is probably going to be This Is The End in which a number of fairly well known actors play themselves attending a party at James Franco’s house at the exact moment the biblical apocalypse breaks out.

You know, I might end up seeing this one eventually. It’s kind of hard to resist the idea of watching all these hipster-generation comedians get knocked off in horrible ways. Did you notice, though, just how many Jewish comedians they crammed into this movie? Is that why Seth Rogen thinks he and his pals aren’t going to make the cut during the end times, or is it just that they’ve been up to something naughty in between movies we don’t know about? Whatever the reason, I don’t suppose it would do any good to tell him that most Christians don’t believe in all that pre-tribulational rapture business anyway? Probably not. Thanks to all those televangelists who littered the airwaves throughout the 80s and 90s, most of the religious illiterates out there are still under the illusion that all Christians sleep with a copy of Left Behind underneath their pillow. That’s probably the reason we’re soon to be subjected to the ignorance that is… Rapture-Palooza.

Yes, you saw right, Craig Robinson is in both of those films. I guess he’s trying to carve out his own little niche as the go-to person for bad tribulation movies. Or dig his career an early grave, take your pick. Like most of the country, I think I’ll be skipping Rapture-Palooza. Jokes about my religion I can take, but only if they’re funny. And nothing about Rapture-Palooza looks funny.

Or course, if you’d prefer a movie that avoids jokes altogether and just have your religion lambasted in a dead serious manner, there’s always the upcoming release of The Last Will and Testament of Rosalind Leigh.

I’ve gotta say, visually, this film looks pretty good, and there’s nothing blatantly anti-religious in the trailer. However, in a piece about the film on NPR, the movie’s writer/director Rodrigo Gudiño (the editor of Rue Morgue Magazine in his directorial debut) had a few choice things to say about Catholicism.

VOICEOVER: As Leon confronts his childhood fears, he never turns to religion or faith for guidance. He looks to reason and science. So the film becomes an atheist's take on Catholic horror.

GUDINO: The protagonist is someone who has rejected the religion of his mother, and has done so as a Western rationalist. And in fact, that's really the only way he could come to terms with some of those things, unless he was going to admit that maybe his mother was right.

VOICEOVER: In Rodrigo Gudino's film, it's not the devil that's scary.

In subsequent interviews, Gudino has backtracked a little on these comments, stating that the problem isn’t necessarily religion but rather its misuse. I guess we’ll see which viewpoint holds sway once the film comes out and we get a look at it. Of course, either way, nothing will change NPR’s snide (and demonstrably false) assumption that turning to faith means turning away from reason. But that’s the narrative these days, isn’t it, especially if you’re to believe the premise behind the upcoming documentary, The Unbelievers.

Dawkins. Hasn’t this guy damaged the credibility of atheists enough? Still, from the looks of the documentary, he’s apparently still something of a rock star amongst New Atheists. I mean, look at some of the names he pulled in for this thing. 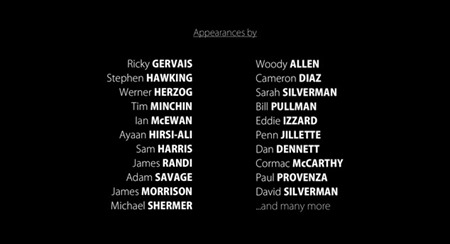 Quite the (snicker) brain trust, isn’t it? I mean, Hawking is a great scientist (if lousy philosopher) and Penn Jillette has always come across as pretty intelligent and fair in his criticisms (and occasional defense) of religion, but the rest? Yes, please, have Sarah Silverman and Cameron Diaz explain to me the fallacies of my faith. I can hardly wait for what will surely be a fount of reason!

Why bother paying attention to all this rubbish? Well, if you buy into the notion that trends in movies are a reflection of prevailing social attitudes, then you have to question what it means when there’s such a hefty slate of anti-Christian films on the horizon. Admittedly, half of them are played for laughs, and ridicule isn’t quite the same as persecution, but still. With such overt antagonism towards Christianity becoming increasingly socially acceptable (and perhaps even worse, marketable), how many generations away are we from real persecution in the United States?

Can't even bring myself to watch any of these trailers. Maybe after some coffee. However, the prospect of Cameron "I only wear underwear once then throw it away because it's more hygienic that way" should certainly be entertaining talking about where the Church is misguided.

I was surprised to see that Bill Maher wasn't at the top of that big brilliant *sucking teeth* list.

These cinematic offerings made me think of your last post's information on Father Dangerous: Bionic Priest and his mission of "sacrifice, love, and punching evil in the face."

I would like to be his sidekick, Parishoner Portentous, instead my duties would be punching banal pretentiousness in the gob. I know. It doesn't fall under the love category.

Hey! My "please prove you're not a robot" section has just provided me with a fantastic name for a sidekick for Captain Reason (aka. Richard Dawkins)

"Can't even bring myself to watch any of these trailers."

This Is The End is almost worth it for the Emma Watson cameo.

"I was surprised to see that Bill Maher wasn't at the top of that big brilliant *sucking teeth* list."

Hey, you're right. That's pretty bad if they were too embarrassed to include him.