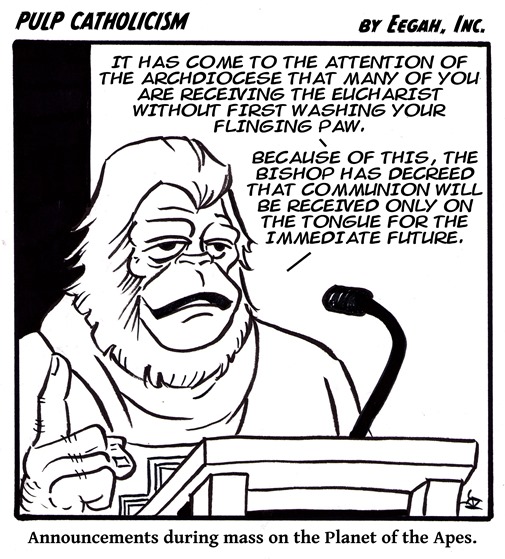 Posted by EegahInc at Wednesday, September 11, 2013

Eegah, you crack me up. God bless you and yours.

Humor with a seed of truth. I've heard that in ancient practice, people intending to receive in the hand washed their hands thoroughly and wouldn't touch anything or anybody before receiving. If this was standard practice today (you would have to eliminate the Pew-lunge of Peace) I'd never gripe about reception in the hand again.

You'd also have to get rid of that AND the new custom of holding hands during the Our Father AND the obligatory stand up and greet before mass starts. Can't say it would bother me to see either one of those go away, but I don't imagine we'll be seeing any of that happen any time soon. Oh well, Jesus didn't balk when the prostitute touched him to wash his feet, so I guess he tolerates our dirty hands. Still, I do miss the show of reverence of a church full of people receiving on the tongue.

One of the things I love about living in the Midwest is that there's no chance any of these German farmers are going to try to hold my hand during Mass. Also, wearing a mantilla is kinda like Bat Shark Repellent to liberals. Too bad there's no male equivalent.

I can't speak for all men, but I seem to generate some kind of antisocial force field whenever I have to attend mass alone. Even when I sit in the most crowded section, rarely does anyone sit close enough to be able to make a grab for my hand during the Our Father.

LOL! Maybe it's not so much of an antisocial force field so much as looking like you're seriously praying.

I'm often at my most cranky on the rare occasions I go to Mass without my kids. If some adult right behind me starts telling her friend all about her husband's bladder infection when I have the chance to, you know, actually see Mass with both eyes, I usually end up sinning against charity.

You're the greatest. Who thinks of rubrics on the Planet of the Apes?

"Maybe it's not so much of an antisocial force field so much as looking like you're seriously praying."

I like that, that's the excuse I'll use from now on :)